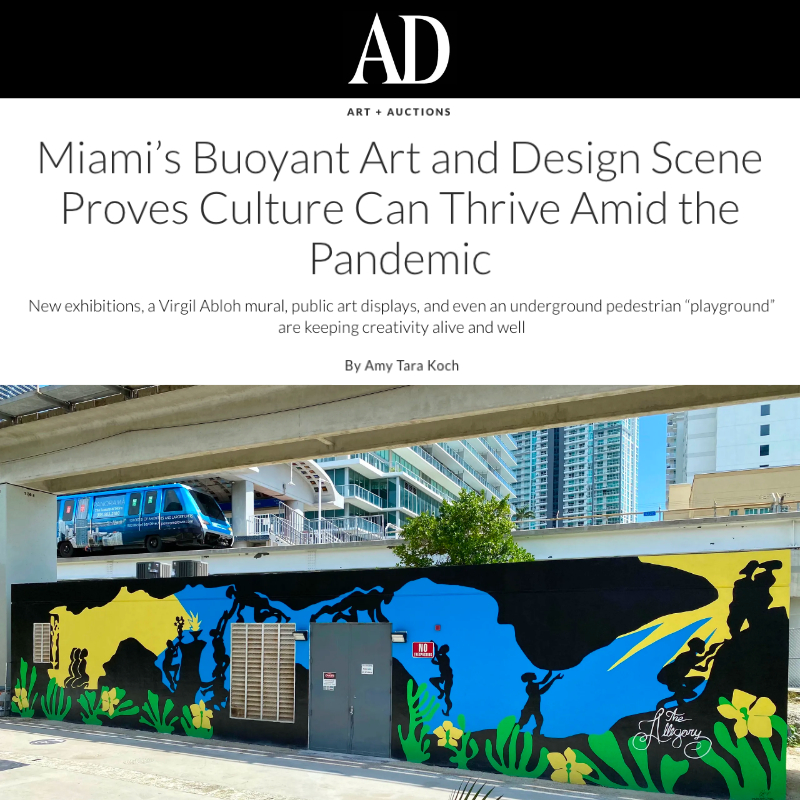 Posted at 11:26h in Featured by admin

In 2002, Art Basel ricocheted Miami into the international art sphere. But, Miami had been steadily embedding its airport, transit system, courthouses, parks, and community centers with noteworthy art since 1973 courtesy of an ordinance earmarking 1.5% of the construction cost of new county buildings for public art. This entity, Miami-Dade Art in Public Places, has overseen more than 700 commissioned installations, while public-private organizations like Wynwood Walls, splashy museum exhibitions, and a slew of visionaries who have incorporated art into high profile outdoor projects. Together, they have fortified Miami’s reputation as a cultural epicenter where emerging talent is championed as fiercely as artists of international acclaim. Happily, Miami’s balmy climes have allowed art projects to thrive despite the pandemic. A look at new and noteworthy outdoor art installations in South Florida.

“In addition to civic pride, our role is to empower artists to take risks and expand their practice”, explains Amanda Sanfillipo Long, Miami-Dade County Department of Cultural Affairs’ curator of Art in Public Places. “Our commissions challenge artists with careers rooted in the contemporary art world to dig deeper and create works that resonate with the city.”

Over the years, that ethos has translated into large-scale installations such as Daniel Arsham and Alex Mustonen’s

A Memorial Bowing (2012) at Marlins Park, Fred Eversley’s Parabolic Flight (2017) at the Miami International Airport, and Erwin Redl’s Volume Miami (2018) at the Port of Miami.  Recently, Liberty City was anointed with a neon pink jet cut aluminum and stainless steel mural I See Myself In You by artists Artists Nekisha Durrett and Hank Willis Thomas. Another boon to that neighborhood will be Xaviera Simmons’ text-based work for the facade of a new African Heritage Cultural Center.  The backlit piece will dramatically illuminate the center’s mission statement.

Craig Robins, President, and CEO of Dacra, the real estate firm behind the Miami Design District, has seen a 30 per cent jump in District traffic throughout the pandemic, in part, thanks to the neighborhood’s art installations. Here, lunch or a shopping excursion involves interactions with works by Zaha Hadid, John Baldessari, and Marc Newson, Virgil Abloh’s mixed-media sculpture Dollar A Gallon III, and fantastically textured alleyways by Daniel Toole. In 2020, on top of debuting interactive playground devices by Chilean studio, Great Things to People (gt2P), Robins commissioned three new public artworks: A Black Lives Matter-inspired double billboard on the Moore Building by For Freedoms and artist Adler Guerrier, the digitized Orchids at Sunrise windows by Cristina Lei Rodriguez for the Sweetbird South building, and a series of photographs by Rafael Diaz that speaks to anonymity in the time of COVID.

“I did not set out to create a COVID safe environment. But, the original mission of MDD, to create an open-air museum woven into a world-class shopping and dining neighborhood, has allowed us to thrive. The art is inspiring (and a magnet for social media) and people feel comfortable outside,” Robins adds.

The Bass Museum, in partnership with the City of Miami Beach Art in Public Places, invited nine local artists to explore the meaning of identity and domestic life through photography, digital renderings, drawing, and collage. The outdoor show, Work From Home (Nov 29, 2020-April 18, 2021), runs across the boardwalk pathway of the museum to Lincoln Road.

Illuminate Coral Gables, (Feb. 12 – Mar. 14, 2021) is all about the transformative power of light. Kiki Smith created Blue Night, a series of plexiglass and mirrored animal constellations that shimmer blue beneath a canopy of palm fronds.  Cai Guo-Qiang loaned a scaled-down version of his blockbuster Dragonflies, mobile, interactive sculptures featuring illuminated Chinese silk lanterns affixed to pedicabs that roam the area. Artists Carlos Estevez and Jonathan Perez offer up artful light projections and duo Antonia Wright and Ruben Millares recast the utilitarian barricade as a glittering objet to spotlight racial injustice. Curator Lance Fung describes the show’s celebratory verve like this: “This is a museum-level show designed to elevate people’s spirits,” he says. “Technology (pedestrians and cars trigger David Gumbs’s building-sized projections to explode into a shower of flora, fauna, roses, and diamonds) and interactive elements (artworks become luminescent when the sun sets) offer an element of surprise.”

Since 2013, The Underline, Miami’s iteration of New York City’s High Line, has been quietly transforming ten miles of barren landscape beneath the city’s Metrorail system into a verdant urban trail. Phase 1, the Brickell Backyard, opened on February 26. Stroll from the Miami River to S.W. 13th Street amidst butterfly-rich gardens of indigenous scarlet sage, firebush and wild tamarind and then laze upon oolite rocks (coral-looking limestone particular to South Florida) to take in the sweeping cityscape. As you weave past cement pillars printed with snapshots of the city’s history, you’ll encounter a powerful mural by Haitian artist Edny Jean Joseph’s inspired by Plato’s allegory of the cave. Next month, Cara Despain’s Water/Tables will be installed, a pair of high concept sea-colored glass terrazzo ping pong tables designed for play and to proffer a message about climate change by mimicking the actual water table—the level of groundwater beneath the surface- that rises through Miami’s oolitic limestone as the sea level rises.

Over at Florida International University, a massive 174-foot flora and fauna-themed mural of Indian vitreous glass by Miami native Michelle Oka Doner will be installed in March.

For a standout meal that doubles as a visual feast, head to the industrial neighborhood of Allapattah where the Rubell Museum’s new alfresco Basque-themed restaurant Leku is set off by outdoor sculpture and Eternal Recurrence, Allison Zuckerman’s massive mural that profers a feminist take on Michaelangelo’s The Creation of Adam.