A Sip to Sip Tour of the “Sonoma of Spain”
22171
post-template-default,single,single-post,postid-22171,single-format-standard,bridge-core-2.6.5,qode-page-transition-enabled,ajax_fade,page_not_loaded,,qode-title-hidden,qode_grid_1300,hide_top_bar_on_mobile_header,qode-content-sidebar-responsive,qode-theme-ver-25.0,qode-theme-bridge,disabled_footer_top,disabled_footer_bottom,qode_header_in_grid,wpb-js-composer js-comp-ver-6.5.0,vc_responsive 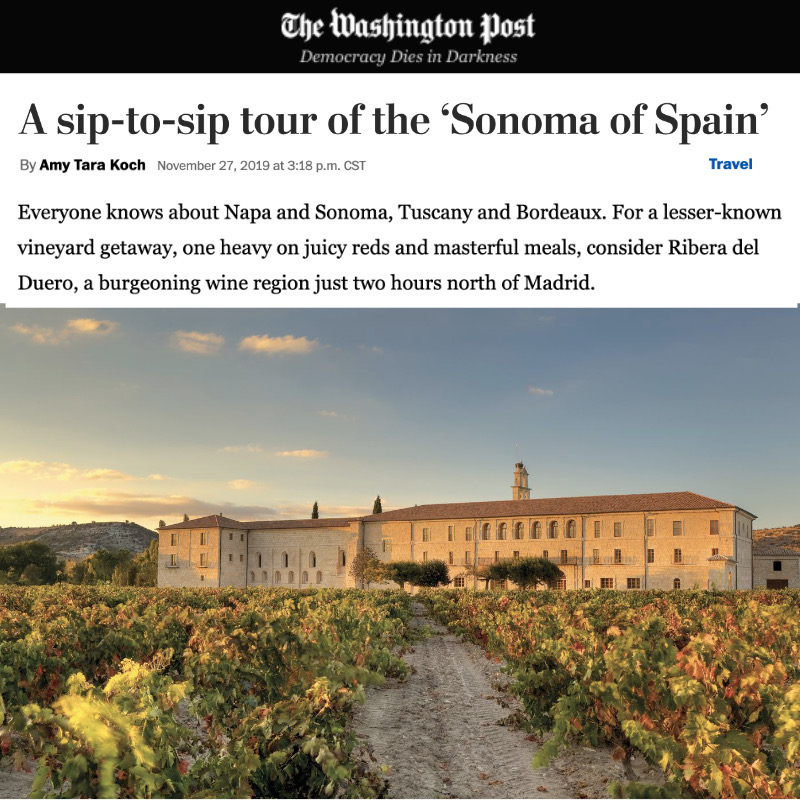 Posted at 14:33h in Featured by Amy Tara Koch

Haven’t heard of it? Except for noticing the appellation on a handful of esoteric wine menus, I hadn’t either. So I decided to drop in on the area dubbed  “Sonoma of Spain” by  oenophile Robert Parker of Wine Advocate.

After spending a night in Madrid, I hopped the fast train to Valladolid and headed north to commence my vineyard hop. Unlike California, with its attractive farm stands and lively, shop-filled Main Streets, Ribera is rural, with one main road snaking through quiet one-bar towns. Further proof I was not in California, I could not locate a single coffee shop for a midday pick-me-up.

Though the road seemed flat, the terraced vineyards I was driving alongside were at an elevation of 3,500 feet, some of the highest in Europe. Punctuating the rustic landscape were unexpected flashes of modernity – a white cube, a terra cotta wave of arches , a celestial-looking Grecian moderne edifice – that housed the wineries.. These bodegas, as the Spanish call them, are what draws tourists to Ribera del Duero. They peep out from beyond a medieval castle, behind an ancient monastery and between groves of fluffy-looking pine trees that seem plucked from The Lorax.

My first stop was 3 Ases, which produces only 50,000 bottles of wine per year. At smaller wineries like this one, tastings are led by the vintners themselves. As we walked through the vines, owner Cesar Arranz explained that the Tempranillo grape, the backbone to Spain’s well-structured red wines, had grown here since the Middle Ages. But it wasn’t until 1982 that local winemakers petitioned for – and won – its own Denominación de Origen  (D.O.)to compete with Rioja, its mighty neighbor to the northeast.

Ribera del Duero is now home to more than 300 wineries – some indie upstarts, others internationally acclaimed labels – that wind through the ancient provinces of Soria, Segovia, Burgos and Valladolid. Arranz poured “Joven Roble” and “Crianza” (different designations of the local wines such as Joven, Crianza, and Reserva indicate how long the wines have aged in oak barrels and in the bottle), followed by a plucky, strawberry-forward rose from a bottle bearing a label of a donkey wearing oversized spectacles. Producing easy-to-drink rose in the land of classic Tempranillo was progressive, he explained.

The move, plus the quirky label, was part of an effort to entice a younger generation of beer-swigging Spaniards to drink wine. When I asked the cost of these wines, I thought that my Spanish had failed me.  6 € for a bottle of killer rose?  8 € for the fragrant Crianza aged for 14 months in French oak barrel? This was shockingly inexpensive even considering the 5% price hike at retail.

Next I visited Abadia Retuerta in Sardon, a more expansive operation where award- winning (Wine Spectator, Wine Advocate,Wine Magazine) wines are produced on 500 acres of terrain that sweep from the southern bank of the Duero River up to 2100feet above sea level. I bounced over the rocky terrain in a 4×4 to seethe  vines – Tempranillo, cabernet sauvignon, merlot, Syrah, Petit Verdot – and the property’s state-of-the-art gravity-flow irrigation system before taking in panoramic views of the Duero Valley from the property’s craggy cliffs. Then a tasting under a 200-year-old oak tree, where chief winemaker Angel Anocibar revealed the basis of the Napa/Ribera comparison. Since both regions are adjacent to rivers and benefit from soil rich in gravel, sand and clay, Napa Cabernets and Ribera’s bold Tempranillo-based wines are structurally similar, meaning they are full-bodied and taste of deep blue fruits like plum and blackberry. A few swigs of Selección Especial later, the comparison rang clear. (Abadia offers nature-based activities to accompany tastings, like e-biking and horse riding through the vineyard followed by a picnic lunch and a gardener-for-the-day experience in the property’s biodynamic organic garden.)

Then, off to Burgos, Bodegas Portia has received international acclaim for its edgy Norman Foster design, which is futuristic indeed. The steel and cement trefoil exploding from the earth resembles The Capitol from the film Hunger Games. Inside, a raised public gallery connects three massive wings to display different stages of the production process, from pulping to bottling. Sadly, the tasting room was completely full (Note: definitely book tastings in advance) so I eyeballed the restaurant, Triennia Gastroba, and took my leave.

Thanks to hearty soil, where there are vineyards, there is usually standout food. I may not have spied casual eateries in and around the towns, but, with direction from locals, I tapped into Ribera’s sophisticated culinary scene.

At Ambivium, the two-year-old gastronomic restaurant inside the stylish Pago de Carraovejas winery, I had my jet-lagged mind blown during a pairings lunch masterminded by chef Marina De La Hoz. Dishes like fatty ox tartare topped with white truffle shavings and wisps of blue cheese, slow roasted suckling pig dotted with creme fraiche and aromatic black rice infused with squid brought the bold flavors of Spain into sharp focus. The food is divine.

But dapper sommelier Guillermo Cruz, 34, steals the show. His zest for storytelling, explaining the nuances of pairing the aforementioned tartare with, say, three vintages of Barolo (1967, 1996, 2013) to underscore the Piedmontese inspiration, added a thrill to the meal. The cost of a twelve course lunch? About $70, $160 with wine pairings.

Another dynamic tasting menu unfolded at the Cepa 21 winery where Alberto Soto, a chef who  employs ‘trampantojo’ or, the element of surprise,  deconstructs traditional flavors into high concept small plates. To wit: His macaron de la Ribera del Duero looks like a cookie, but, is actually lamb pate between two crunchy discs of dehydrated wine- flavored jam. Salmorejo, a classic creamy tomato soup with ham and egg, became, in his hands, a meringue-based, hand-eaten tapa filled with a dash of the cold soup. The price tag for this inspired 13-course meal was $66, $88 with wine pairings, a fraction of what such an experience would cost in Madrid.

As I drained my wine, I told chef Giorgio de Marco how much I wished to see one of the ancient underground bodegas popular in this area. A few minutes later, a neighbor turned up and led me up the street and into a door tucked into a rock formation. Inside, down a slimy path and through an iron grill, I entered a Game of Thrones-looking cell filled with musty wine barrels.Wine was siphoned directly from a barrel and we (five fellow diners had trailed us to the cellar) raised a glass to good health. Most of these bodegas are private. A similar experience can be had at Bodega Don Carlos (in Aranda de Duero) where tastings and meals are served in a historic underground cellar.

I need to splice gorging with recreation. Happily the sloped terrain offered ample opportunity to hike. The Quintanilla de Onsimo Trail follows the River Duero for 8.6 miles on pathways trodden by fishermen hundreds of years ago through plains and vineyards. This can be made into an all-day trek if you continue up to Peñafiel Castle and end at the stunning Castilla Termal Monastery of Valbuena, a five-star hotel within a preserved 12th century Cistercian monastery.

One afternoon, I headed to Parque Natural Hoces del Rio Riaza in northeast Segovia, a spot celebrated for lunar-like terrain, specifically gorges formed by the Duraton river. On top of hiking and kayaking, the park is a famous breeding ground for birds of prey. As I descended into a juniper-scented canyon, there were griffon vultures, wings extended almost 10 feet, circling above the cliffs. Later, with the help of binoculars, I spied a peregrine falcon imperiously perched above  a ravine.

The days flew by, a flurry of big flavors, bold wine and transcendental scenery. Whether you stay in Ribera del Duero or make a day trip from Madrid, this pocket of Spain gets high marks on hospitality.

A natural park of gorges, caves and canyons along the Duration River in northeast Segovia. Guided nature tours can be organized through Abubilla Ecoturismo.

This story originally appeared in the Washington Post on November 27, 2019.