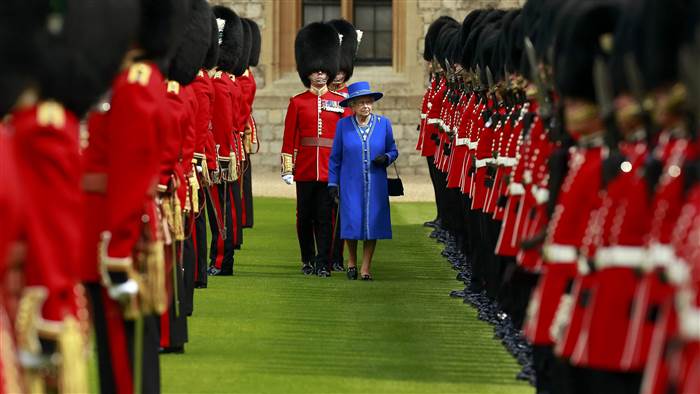 03 May Channel Your Inner Monarch: A London Itinerary that Celebrates The Queen's 90th Birthday

Queen Elizabeth turned 90 on April 21, but festivities celebrating the nonagenarian will continue for weeks, adding a layer of celebratory verve to those visiting the U.K. this spring.

Here is my piece for TODAY on how to tap into the royal hoopla if you’re planning a trip across the pond this summer.

1. Visit Windsor Castle in May.

The oldest occupied castle in the world is an ideal day trip for families. Though tickets are sold out to the official four-night celebration of the queen’s birthday, from May 12-15, a visit to the quaint Berkshire county allows you to tap into the jollity. A castle tour (make sure to catch the changing of the guard at 11 a.m.) is a must. Then, spend a pleasant afternoon taking a horse-drawn carriage ride, having a classic afternoon tea and boating down the River Thames.

2. Check out the Trooping the Colour Parade in June.

Catch the Queen’s annual pomp-and-circumstance-filled birthday parade called Trooping the Colour on June 11. This military ceremony (it dates back to the 17th century) involves 1,400 soldiers from the Household Division, 200 horses and 400 musicians marching alongside Her Royal Highness, who rides by carriage from Buckingham Palace along The Mall to Horse Guards Parade, Whitehall and back again before she is joined by the royal family for a balcony appearance and Royal Air Force fly-by. Again, it’s sold out. But, hanging out in The Mall and watching the royal spectacle on jumbo screens in St. James’s Park is equally thrilling.

3. Give noble sightseeing a try.

There are certain buildings that figure prominently in the queen’s life. Buckingham Palace, of course, is a must-see spot. Catching the changing of the guard (11 a.m. daily) is a highlight for children.Parliament and Big Ben are mandatory. The queen, of course, presides over the opening of Parliament each year. There’s also Westminster Abbey, the 10th century architectural marvel that also served as the site of Queen Elizabeth’s coronation (and that of all monarchs). Explore the incredible collection of stained glass, artwork and the highlight: the royal coronation chair. The site of royal burial tombs can also make for a fun game for children, with a search for the names of kings, queens and esteemed British luminaries.

4. Craft your own royal program.

For the more independent traveler, fashion a DIY royal program in London by visiting the queen’s preferred hangouts, and sampling her favorite foods, goods and services. This way, you can celebrate the festivities on your own timetable — without the crowds.

How? Since the Middle Ages, the British monarchy has bestowed a mark of distinction upon top drawer “tradespeople” called the royal warrant. Selected for use by the queen, holders of the warrant are permitted to feature the “by appointment to her majesty the queen” endorsement on their products and marketing materials. Visiting these vaunted spots makes for a fun family itinerary.

Since 1742, Paxton & Whitfield has been supplying top drawer restaurants and hotels with artisanal cheese culled from every corner of the UK as well as the European continent. Queen Victoria first proclaimed Paxton & Whitfield cheesemonger to the Queen in 1850. The brand has held onto this honor with subsequent warrants issued by HM King Edward VII, HM King George V, HM King George VI, HM Queen Elizabeth, The Queen Mother and HRH, The Prince of Wales. Go hungry and don’t be shy about asking for samples. The cheese stewards are happy to dispense intel (ask about acidity!) and tastes of esoteric product like the Fleur de Maquis, a Corsican ewe cheese encased in rosemary and juniper berries.
Just a few doors down is Floris, England’s oldest retailer (established in 1730) of toiletries and fragrance. While most royal warrant holders are hush hush about their customers, Floris has a small museum in the back of the shop with letters and archived receipts/purchase orders from various palaces and high wattage clientele like Florence Nightingale, Ian Fleming, Marilyn Monroe and Winston Churchill. Though the shop is posh,  inexpensive soaps and bath gels make perfect souvenirs for the kids. Note how change is returned on a velvet pad. The shop retains this custom as it was considered “vulgar” in the 18th century to touch another’s hand.
A short walk away in Piccadilly is Prestat Chocolat, a shop known as much for theatricality as delicious chocolate. John Gielgud, Cher, Tina Turner and Paul McCartney have all nipped into sample the “gourmet gorgeousness” of  chocolates, “cheeky” fruity babes and  “debonair” ginger hunks. Classics (theMarc de Champagne, an exact iteration of the first truffle recipe ever recorded in 1895 by Prestat founder Antoine Dufour) are still in demand. The film Willy Wonka and the Chocolate Factory is said to have been informed by longtime customer Roald Dahl’s fascination with the brand’s exotic ingredients. Royal favorites? The Queen loves violet cremes. Wills’ and Kate served truffles at their nuptials. Prestat’s whimsical chocolate- filled keepsake boxes are only about $18.
Pop into iconic department store Fortnum and Mason, for a fancy pants afternoon tea in the Diamond Jubilee Tea Salon. The Royal Grocer for 150 years, this elegant restaurant offers some of the tastiest scones and tea cakes in London. Served, of course, with Fortnum’s signature tea blends. A more casual tea can be taken downstairs at the shop’s ice cream cafe,  The Parlour.
Buying your child a book at the oldest bookshop in London is the stuff of scrapbook memories. Opened in 1797, Hatchard’s is the oldest bookshop in London and has been supplying royal households with books for generations. The ambiance is as divine as the selection. Entering the wood paneled Georgian edifice and walking up the creaky staircase to the kids’ section has an alluring Hogwarts vibe.

There are certain buildings that figure prominently in the Queen’s life.Buckingham Palace, of course, is essential sightseeing. Catching the changing of the guard (11 am daily) is a highlight for children. Parliament and Big Ben are mandatory. The Queen, of course,  presides over the opening of Parliament each year. Then, there is Westminster Abbey the 10th century architectural marvel where Queen Elizabeth (and all monarchs) were coronated. Explore the incredible collection of stained glass, artwork and- the highlight- the royal coronation chair. The site of royal burial tombs, make an activity out of finding the names’ of kings, queens and esteem British luminaries.
TIP: Many of these sights can be viewed by water taxi from the River Thames.